Brazil took a licking but it is still kicking 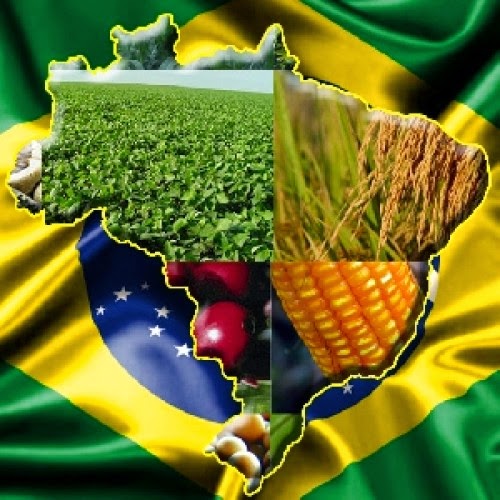 I have no doubts that I have quoted before this affirmation from Alan Beattie, even because I have made my entire career in the Brazilian agribusiness and do agree with him.

I joined the agribusiness sector in 1973, when I had hair, illusions and fifty pounds less.
In that year Brazil was known mainly as a coffee producer and exporter. The progress of the Brazilian agribusiness obtained can be appreciated on Tables I and II below and the gains obtained by the country explain what has inspired that famous sentence.

I – World and Brazilian Production of Selected Vegetable and Animal Products 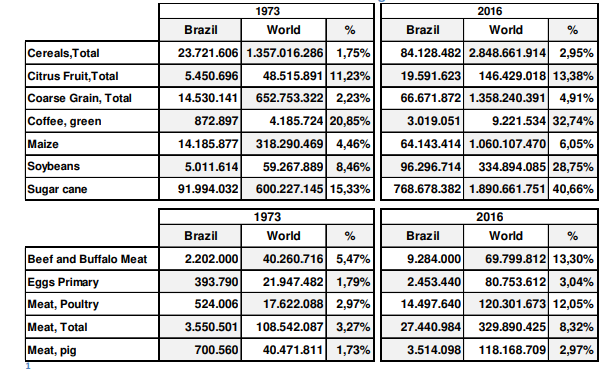 So what did Alan Beattie forget to say since Brazil in 2018 has had one of its worst years for its exports particularly in poultry meat where the country has a leading position?

Permit me to list some points that he was not aware of:

• That Brazil has as its main enemy its own government
• That Brazil is an agribusiness powerhouse situated in a country that does not count internationally.
• The size of the armed forces is 334 500 for a total population of 207 million. The country has not fought a war since 1864 when it was invaded by Paraguay.

• We do not threaten our neighbors since we are too busy killing ourselves (one Vietnam every 16 months results from urban violence), we don’t have an atomic bomb nor any ideology that makes us to slaughter people in the name of whatever.
• The country is headless and power is occupied by a bunch of crooks that make of
Al Capone a week-end dilettante.
• Out of 600 congressmen, more than 350 are being investigated or have become defendants in criminal actions.

• They approve laws that put them above the law. A bunch of young prosecutors, judges and Federal Police fight to make justice prevail, but for me is like drying ice.
• So feel free to kick Brazil around. They neither can nor will retaliate and probably their government will help you to do so.
• A so called popular government has occupied power for 20 years, implementing experimentalist ideas that affect most aspects of the country’s life, preached intolerance through “us against them” and it is now proved that they have held the most corrupt regime in world’s history.

• Some of the so called “social organizations” financed by public money would invade and occupy farms and agricultural investigation center in the name of the landless farmers.
• Out of 600 congressmen, more than 350 are being investigated or have become defendants in criminal actions. They approve laws that put them above the law.
One ex-president, several state governors, the ex-president of congress, myriads of ministers, mayors of the main cities, authorities of all levels and entrepreneurs
– you do not have corrupts without corruptors – have already been convicted for corruption, money laundering, etc and some are facing jail time.
• A bunch of young prosecutors, judges and the Federal Police fight to make justice prevail, but for me is like drying ice since the superior courts integrated by judges selected by political criteria keeps granting them ways out of jail.

So does that mean that Brazil is kaput? Mark Twain’s famous quip “The rumors of my death have been greatly exaggerated” could be applied to Brazil’s agribusiness, even if we could add to all the listed negative aspects some relevant issues that have directly affected the agribusiness sector this last year.

Those were examples of problems we have faced this year of 2018, but considering the wonderful figures presented on the two previous tables, shouldn’t we proud that the country is a world agricultural power?

Or should we be worried that this agricultural power is situated in a country that internationally does not count?

Can Brazilians see any light at the end of the tunnel that isn’t a train coming their way at full speed? The answer is yes, because Brazilians have elected a new president that will start the mandate in January 2019. And absolutely nobody expected him to be elected since he did not have a party structure to support him, had no TV free time to advertise his candidature, had most of the press and the main Brazilian communications networks against him, did one of the least expensive campaigns and suffered an assassination attempt that kept him in hospitals for a good part of the campaign period. He was the first president elected through social media by people that had had enough of the bla-bla-bla while the country deteriorated.

Does it mean that Brazil solved all its problems? The answer is absolutely no and, being a defender of the ideas of Deming, Ishikawa and Vicente Falconi, I do not believe in modern messianic figures, but only in data & facts, methods, systems, constant improvements and training.

But even under a most unfavorable scenario we have continued to make out of Brazil an agricultural powerhouse and data exposed on Table II supports this statement. 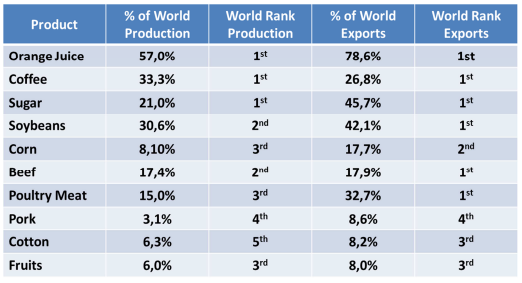 Agriculture is photosynthesis + water + arable land. Brazil has > 12% of world’s water reserves and could triple its arable land and still be above the world average or the G-7 countries’ tree-covered area.

Brazil has increased its agribusiness production above the levels of world growth and will continue to do so (cf. Tables IV and V). 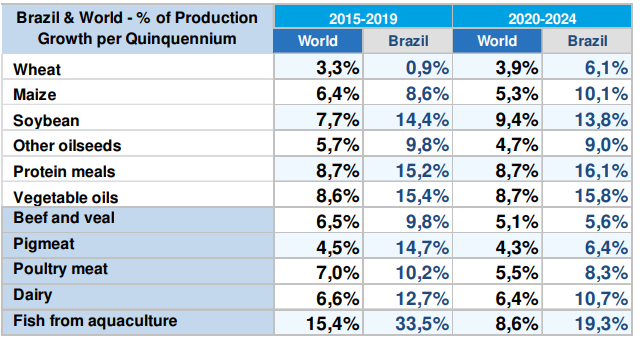 There is not one factor that explains but a conjunction of conditions that have created a favorable environment for the agribusiness in Brazil.

Science & technology, together with stubborn, masochist entrepreneurs with kamikaze tendencies seems to be working nicely as Graphic I shows. Even operating under an unfavorable institutional scenario and suffering from protectionism without the power to retaliate the Brazilian agribusiness carries on. 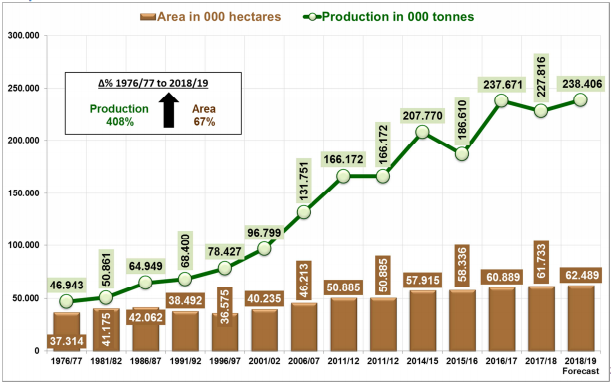 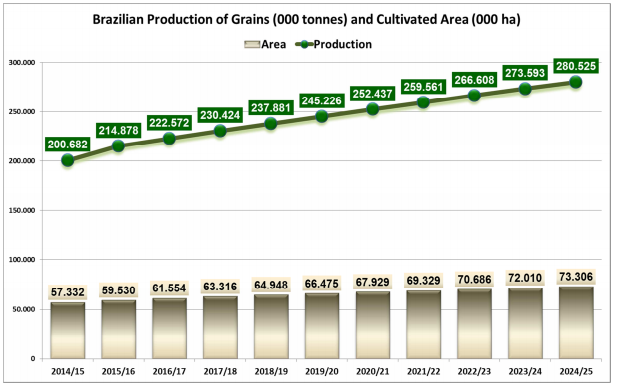 OECD-FAO forecast a continued growth for the Brazilian agribusiness production 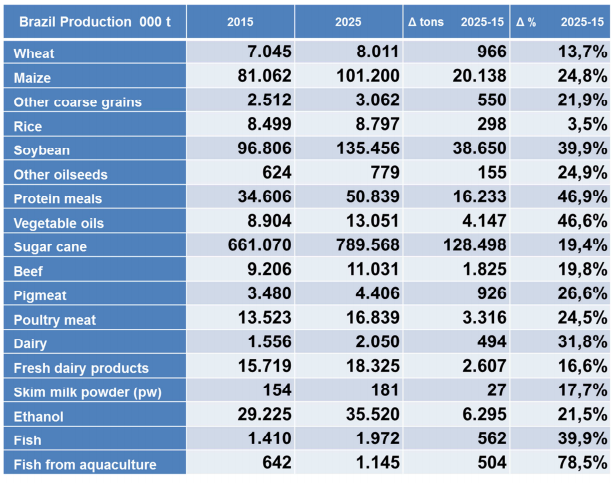 These figures will probably provoke shouts from activists that they are the demonstration that Brazil is achieving such increases by destroying the forests. I have no intention of destroying with data and facts their biased ideas, but FAOSTAT data shows that Brazil uses merely 33,92% of its land area for agriculture and that 58,93% of its land area is covered by forest. Brazil’s tree-covered area totals 4.396.926.215 thousand hectares equivalent to 10,1% of the world’s total tree-covered area.³

So dear activists stop your ‘do what I say but don’t do what I do” and do have a look if the figures of your country even approaches that.

So does it mean no problems for the Brazilian agribusiness?

Of course not. Brazilians will bleed, 2018 was an awful year, companies will lose money and some will close down. Exports in the best case scenario will be reduced by 80.000 mt or 240.000 tm in the worst case. Production may go down by 3% in the year

Realistically analyzing we cannot feed the 9,4 billion crew of Planet Earth by 2050 without USA and Brazil (I am not being patriotic, and I do hold a French passport)

In this process USA will confirm that he who has more power cries less. Brazilians will continue their destiny of Sisyphus, a king from the Greek mythology condemned by the gods to roll an immense boulder up a hill only for it to roll down when it nears the top, repeating this action for eternity. Our version of gods is the government and Sisyphus presently works in the Brazilian agribusiness.

And suppose this new government that will take power now in 2019 surprises us? I am truly do not know what would happen, because we have built the world’s second agribusiness powerhouse under friendly fire. Why did we do it? Because we had no options and one fights harder when one has no other options. We are used to take lickings and we are still kicking.